Growing from a broad research effort at U.S. universities and national laboratories, Kairos Power was founded to accelerate the development of an innovative nuclear technology that has the potential to transform the energy landscape in the United States and internationally.

Kairos Power is focused on reducing technical risk through a novel approach to test iteration often lacking in the nuclear space. Our schedule is driven by the goal of a U.S. demonstration plant before 2030 and a rapid deployment thereafter. The challenge is great, but so too is the opportunity.

Kairos is an ancient Greek word that relates the importance of timeliness and a call to action. Today, Kairos Power exists to accelerate innovation in nuclear power and enable affordable access to clean energy.

Dr. Michael Laufer is the Co-Founder & CEO of Kairos Power. In this role, Dr. Laufer is responsible for high level strategy and operations within the company for Kairos Power’s design, development, and commercialization of the Kairos Power Fluoride-Salt-Cooled High-Temperature Reactor (KP FHR).

Prior to co-founding Kairos Power, Dr. Laufer was a postdoctoral scholar at the University of California, Berkeley where his research included work in reactor safety, design, licensing, and code validation for advanced non-light water reactors. His technical expertise includes experimental and discrete-element simulation methods for granular flows relevant to pebble-bed nuclear reactors.

Dr. Laufer graduated from Stanford University with a B.S. in Mechanical Engineering with Honors in International Security Studies. He received his Ph.D. in Nuclear Engineering from the University of California, Berkeley.

Dr. Edward Blandford is a Co-Founder & CTO of Kairos Power. He is responsible for technology development, experimental testing, modeling and simulation, and licensing activities at Kairos Power.

Prior to co-founding Kairos Power, he was at the University of New Mexico where he was an assistant professor in the Department of Nuclear Engineering. Dr. Blandford was also a Stanton Nuclear Security Fellow at the Center for International Security and Cooperation at Stanford University. He also worked for several years as a project manager at the Electric Power Research Institute focusing on steam generator thermal-hydraulics and material degradation management.

Dr. Per Peterson is a Co-Founder & Chief Nuclear Officer of Kairos Power. Dr. Peterson also holds the William and Jean McCallum Floyd Chair in the Department of Nuclear Engineering at the University of California, Berkeley.

He is an expert in topics related to high-temperature fission energy systems, safety and security of nuclear materials, and waste management. As a member of the Evaluation Methodology Group, he participated in the development of the Gen IV Roadmap while serving as co-chair for the Proliferation Resistance and Physical Protection Working Group. His research has contributed to the development of the passive safety systems used in the General Electric ESBWR and Westinghouse AP1000 reactor designs. With Charles Forsberg and Paul Pickard, in 2003, he proposed the FHR concept of a molten-salt cooled, solid fueled reactor.

Mr. Peter Hastings is the VP, Regulatory Affairs & Quality at Kairos Power and leads teams responsible for licensing and permitting activities, safety analysis and probabilistic risk assessment, and quality assurance, with a focus on establishing the regulatory basis for Kairos Power's reactor technology.

Mr. Hastings earned his B.S. in Nuclear Engineering from North Carolina State University. He is a registered professional engineer in North and South Carolina.

Mark Peres is the Vice President of Engineering at Kairos Power. He is responsible for engineering design of the Kairos Power Fluoride-Salt-Cooled High-Temperature Reactor (KP-FHR). His focus is on developing a plant that is safe, will work, can be constructed, and that clients will buy.

With nearly four decades of experience in the nuclear industry, Mark previously served as Executive Project Director in Fluor’s Nuclear Power Group and Fluor’s Project Manager for a Small Module Reactor (SMR) project. Peres has also led Fluor’s support to the NuScale SMR from design development to the industry’s first design certification application for an SMR that was submitted to the Nuclear Regulatory Commission. He was also responsible for the reactor plant design, including the reactor module, structures, balance-of-plant, safety analyses, and fuel and core design. Mark also successfully managed several challenging projects including the $2.5 billion K Basins Closure Project, as Vice President, responsible for removing 2,100 metric tons of spent nuclear fuel and more than 50 cubic yards of radioactive sludge from the two million gallon Cold War era storage basins. Earlier in his career, Mark was a reactor operator and shift manager at the sodium cooled Fast Flux Test Facility (FFTF).

Lou Martinez Sancho is the Vice President of Strategy and Innovation for Kairos Power, and has over 20 years of progressive experience managing teams in an array of industries including bio-tech, energy, automotive, and architecture, engineering and construction (AEC).

Martinez Sancho has focused on accelerating the innovation of the nuclear industry by developing strategic integration of technologies as key solutions against climate change, guaranteeing energy supply security, and competitiveness of energy prices.

Mr. Jeffrey Olson is the Vice President of Business Development and Finance for Kairos Power, and has over 10 years of experience managing strategic growth initiatives for energy technology companies to develop, scale and manage their businesses. Prior to his direct engagement in the early stage energy sector, Mr. Olson spent the first half of his career in management consulting advising Fortune 500 companies on business growth and systems development.

Prior to joining Kairos Power, Mr. Olson led strategic partnership development and commercial operations at the artificial intelligence energy storage provider, Stem, Inc., as the company’s Vice President of Partner Operations. Mr. Olson joined Stem from the fuel cell sector in his roles in corporate finance and international business development with Bloom Energy. Mr. Olson also served as an executive with Accenture’s Strategy Group where he was a founding member of Accenture’s Global Sustainability Practice.

Mr. Olson graduated from the University of California, Berkeley with an MBA and a Certificate in Engineering & Business for Sustainability. He received his B.A. in Economics from St. Olaf College.

Previously, Mr. Gardner managed licensing document development activities associated with the NuScale and mPower small modular reactor programs. Mr. Gardner also managed licensing activities for the US EPR, where he was a 2008 Engineer of the Year, the Mixed Oxide Fuel Fabrication Facility currently under construction, and the Yucca Mountain Project Site Recommendation.

Mr. Gardner has a M.S. in Engineering and a B.S. in Nuclear Engineering both from the University of Tennessee. He is a member of the American Nuclear Society (ANS) large light water reactor consensus committee.

Dr. Oded Doron is the Director, Engineering Design at Kairos Power. He is the design authority of the nuclear island for the Kairos Power Fluoride Salt-Cooled High-Temperature Reactor (KP-FHR). In addition, he is currently directing teams for the development of the design and analysis for the reactor systems. His focus is on developing a design that is inherently safe, cost-competitive, and can be built.

Dr. Doron has a wide range of engineering experience and knowledge. He is the third generation in his family to be involved in steel fabrication and engineering, and previously owned the responsibility of the design of several in core components for TerraPower’s traveling wave reactor.

Dr. Doron also worked at Sandia National Laboratory in nuclear forensics, where he helped in the development of sensor technology for the detection of nuclear detonations in urban environments, was awarded an Outstanding Innovation Award for his US patent application and was co-inventor on a patent. Dr. Doron also worked in the shielding group at Knolls Atomic Laboratory.

Dr. Doron earned both his Ph.D. in nuclear engineering and B.S. in mechanical engineering at the University of Texas at Austin. Dr. Doron is a Professional Engineer registered in Texas with a dual competence in Mechanical and Nuclear Engineering.

Mr. Boukal graduated from Creighton University with a degree in Marketing and received his MBA with a concentration in International Business from the University of Central Florida.

Dr. Craig Gerardi is the Director, Engineering Testing at Kairos Power. He is currently directing teams that are enabling the development of the Kairos Power Fluoride-Salt-Cooled High-Temperature Reactor (KP FHR) through rapid scaled testing and technology demonstration. Development efforts are focused on component fabrication, scaled testing, salt technology development, and supply chain for design, licensing and deployment of the KP FHR.

Dr. Micah Hackett is the Director, Technology Development at Kairos Power. He is currently directing teams for the development of materials and fuel for the Kairos Power Fluoride-Salt-Cooled High-Temperature Reactor (KP FHR). Development efforts are focused on technology, testing, fabrication, irradiation qualification, and supply chain for licensing and deployment of the KP FHR.

Dr. Hackett earned his Ph.D. at the University of Michigan in nuclear engineering in 2008. He is a member of the American Nuclear Society (ANS) and Minerals, Metals, and Materials Society (TMS).

Before joining Kairos, Dr. Kruizenga led high-temperature salt and other materials science and chemistry programs for energy systems at Sandia National Labs. While at Sandia, Alan was awarded the highest honor bestowed by the US government on outstanding scientists and engineers in the early stages of their careers, the Presidential Early Career Award for Scientists and Engineers.

Dr. Kruizenga is passionate about bringing practical knowledge, application-orientation, and problem-solving to theoretical science to make great ideas a reality. During his postgraduate studies at the University of Wisconsin, Madison, Dr. Kruizenga was a Nuclear Regulatory Fellow where his work focused on heat transfer in complex geometries for the SCO2 Brayton cycle application.

Dr. Kruizenga is a recipient of the 2017 Presidential Early Career Award for Scientists and Engineers (PECASE) from President Obama.

Previously, Mrs. Rodriguez was a part of various Human Resources teams within the healthcare and financial services industries, focused on driving recruitment, compensation, and employee relations.

Mr. Brandon Haugh is the Director, Modeling and Simulation at Kairos Power. He is currently directing teams for the development of modeling and simulation tools for the Kairos Power Fluoride-Salt-Cooled High-Temperature Reactor (KP FHR). Development efforts are focused on system modeling, fuel performance, high temperature materials and source term modeling for licensing and deployment of the KP FHR.

Previously, Mr. Haugh was Director, Innovation and Special Projects for Studsvik Scandpower Inc. with a focus on business development, licensing and deployment of LWR core design tools. Mr. Haugh also worked for NuScale Power, where he was the initial reactor physicist and helped originate the reactor analysis organization.

Mr. Haugh earned his M.S. at the Oregon State University in nuclear engineering in 2002. He is a member of the American Nuclear Society (ANS).

Mr. Gordon (Gordy) Vytlacil is the Director, Quality Assurance at Kairos Power. He is currently directing teams for the development of the quality program.

Mr. Vytlacil earned his B.S. at the University of Wisconsin - Madison in Nuclear Engineering and Engineering Physics with an additional major in Physics in 1989.  He is a certified Lead Auditor and has been certified as a project manager, Lean/Six-Sigma Black Belt, and causal analysis lead (apparent and root). 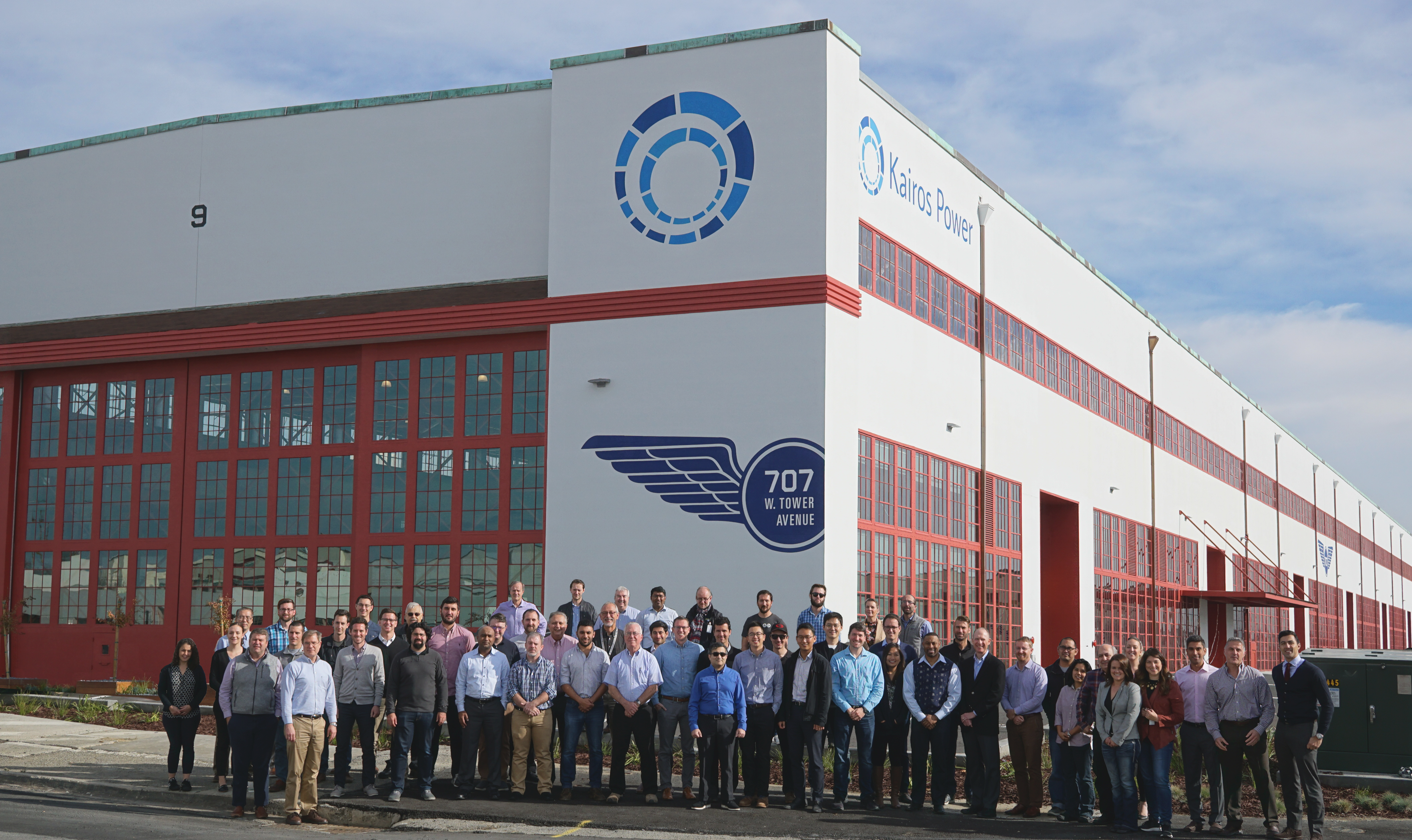